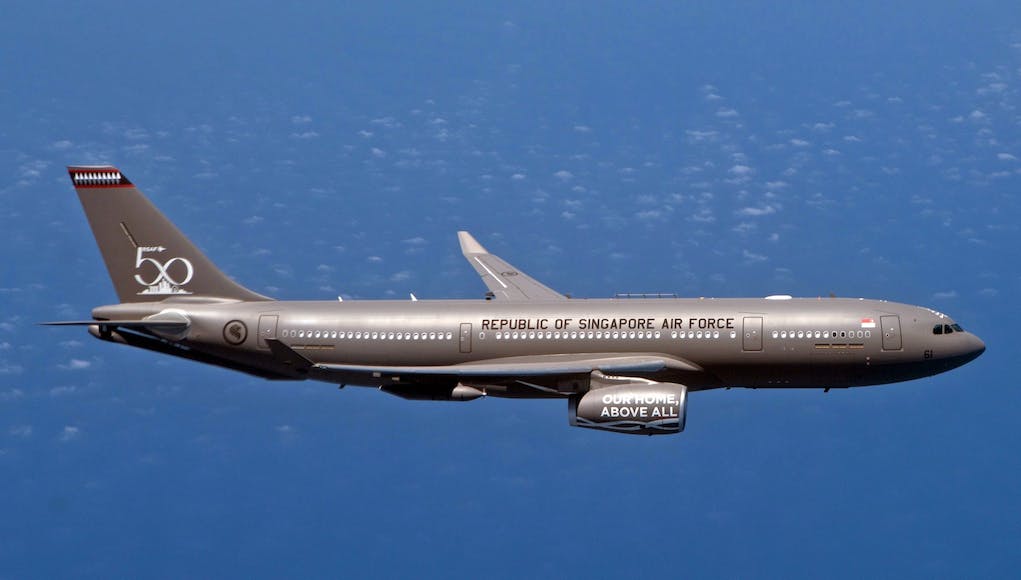 The aircraft made its first official public appearance on Saturday the 1st of September 2018 at the RSAF’s 50th anniversary parade.

The Republic of Singapore Air Force selected the A330-200 MRTT in February 2014 over the Boeing KC-46, and signed for a delivery of six aircraft.

Airbus say that the new-generation A330 MRTT extends the endurance of the RSAF’s fighter aircraft, and ensures the service’s continued capability to provide air-to-air refuelling support.

It also provides the RSAF with greater cargo and passenger transport capabilities, and enhances its ability to contribute to international humanitarian assistance and disaster relief (HADR) and peace support operations.

The Airbus A330 Multi Role Tanker Transport is an aerial refuelling tanker aircraft based on the civilian Airbus A330.

The EADS/Northrop Grumman KC-45 was a version of the A330 MRTT proposed for the United States Air Force but this did not progress beyond the concept phase.

Just the ticket for funding out of our foreign aid budget.

“It also provides the RSAF with greater cargo and passenger transport capabilities, and enhances its ability to contribute to international humanitarian assistance and disaster relief (HADR) and peace support operations.”

so were we the only ones stupid enough to get ours without the boom fitted?

By the looks of it yes… It was a really stupid decision and I have no idea why it was made.

Even if we had no current jets with that requirement we could have had the ability to better support our allies. It can’t have cost much less to have it with the boom?

Without not with…. Really want edit function!

We all know why we didn’t, it costs a little more. Strange small cost savings like not putting link16 on the wildcats or not including ciws on the current frigates etc, just make no sense at all.

(Chris H) Lee1 – Why should we equip our aircraft to benefit other air forces? Do they? No. If we have kit we need that they can use as well fine. But why would we go to the bother of an ARBS to refuel our small fleets of C-17 and RC-135 which have long range anyway? We already know Boeing can fit probe / drogue refuelling to their fuselages (as in Sentry) so it would be a dafter decision to NOT fit the Poseidon’s with that system. Its only USAF aircraft (and their export versions) that use boom refuelling. Let… Read more »

@Chris, some ideas why …
_The boom delivers fuel at a faster rate than a basket
_The boom allows transfer of fuel both ways (useful if there is a need to off-load fuel from an aircraft to lighten its landing weight)
_The P-8s (and future E-7 if the RAF get it) only refuel with booms and need to refuel for extended range during operations.

I wonder if the Singaporians paid the same as the UK for the frankly exuberant Voyager series aircraft. They are utter crap and cannot eventful our newly purchased Poseidon MPAs. £14 billion for a tanker aircraft programme. Good god the RAF like to waste precious defence budget resources.

Sure they are not crap otherwise the RAF would not have purchased them.

The price includes more than just the aircraft. We are buying a service for many decades.

The voyagers are excellent. It is the purchasers lack of thought and ordering them without the boom that is the issue. As far as I know they are owned by a civilian company and leased to the RAF. (Stupid beyond belief!) and as the RAF did not specify the need for booms the private company went with the cheapest possible option as they need to make money out of the deal.

Lee1- the Voyagers are operated by Air Tanker Ltd,whose makeup consists of Rolls Royce,Cobham,Airbus and Thales Group,hardly anything to be concerned about pedigree wise I would have thought.Perhaps in the future the contract can be ‘tweaked’ a little to enable some of the spare Aircraft to be modified to use booms.

The problem is that they are private companies which have shareholders. Those shareholders want to make as much money as possible and deliver as little as possible… That is not a good idea when it comes to running a key function of the military. It increases costs and reduces ability. The RAF should own these aircraft. I am not sure at the moment if there is anything in the contract that could make Air Tanker Ltd refit their aircraft for us.

heres another thought,the USAF has Air Refuelling assets at RAF Mildenhall,maybe an arrangement can/has been made to use their boom equipped Tankers when needed negating the need for the RAF ones to be so equipped ,without triggering clauses in the contract.

Is that a good solution? I mean this is the RAF we are talking about, not the Irish Air force! I mean that is currently the solution we are using, but it is not a good one. We should have our own fully owned refuelling tankers and the tanker force should have the ability to refuel all of our current aircraft.

The Air Tanker contract has proven to be poor value so we really ought to terminate it and simply purchase our own Voyagers.

(Chris H) Quote:
“The Air Tanker contract has proven to be poor value so we really ought to terminate it and simply purchase our own Voyagers.”

Really? OK care to knock out a business case spreadsheet for us to prove it is indeed bad value and owning them would be more cost effective? And why is Air Tanker the problem over ARBS? The RAF don’t need them and never asked for them. It got what it wanted.

The National Audit Office and the Public Accounts Committee have both done the calculations and reported that the contract was not good value. They have access to all the figures…

Lee1- Yes the NAO did scrutinise the deal and found issues with the way it was set up and during early implementation but now it has been operational for a few years for a cost of £390 million PA id say it was good value.

(Chris H) Lee1 – Forgive my asking this but you do realise that the £10.5 Bn (in 2008 money) is not to just source 14 aircraft? It is the POTENTIAL cost of full continuous operation of 14 tankers for 27 years including all maintenance, building all hangars and facilities, training and supplying ground crew and aircrew numbers and ensuring they are available at all times. We currently only need 9 so without this PFI we would have had 5 A330s sat in hangars costing a fortune in depreciation and storage maintenance for over 6 years. But that wouldn’t have been… Read more »

With those uneducated comments, I suspect your surname is actually ‘End’.

(Chris H) Mr Bell – Well if they can’t that is hardly the fault of the RAF, Airbus or Air Tanker is it? It seems the MoD are too frit to demand (as paying customers) that Boeing deliver those aircraft with UK specific refuelling systems. It has been done before on the 707 derived Sentry so is it really beyond Boeing’s capability to add it on new build 737 derived Poseidons which have very similar nose and front fuselage

From what I gather it costs quite a lot to modify the refuelling systems on these aircraft. However that obviously does not mean it is not a possible solution. However it is probably cheaper to refit 2 or 3 voyagers with booms and you also get the other benefit of faster fuel transfer and less weight and drag on the receiving aircraft. It is probably a good idea to fit refuelling probes to the voyagers themselves too as they currently do not have them and so are not able to be refuelled mid air which is an odd decision even… Read more »

(Chris H) Lee1 – You make a fair point if it was about modifying C-17 or RC-135 aircraft because they are already built and there are few of them. But then that argument also works against fitting ARBS to UK Voyagers. Because so few aircraft would use them. And if the RAF did do that it would have to go through a whole new approval and certification process. Very expensive even though Voyager is passively engineered for ARBS. It does of course already have a high capacity drogue station in the rear fuselage. But I was referring to the Poseidons… Read more »

(Chris H) – All those on here slagging off Air Tanker clearly don’t understand how its contract is structured. We buy on a “per hour used” basis with a basic minimum guaranteed (which is always exceeded). Any unused A330s are leased out by Air Tanker to private airlines like Thompson. The RAF don’t even maintain them. But all we hear is ‘It costs too much’ without quantifying how much they would have cost to fund the capital costs, maintenance costs and the redundancy costs of the unused aircraft. I doubt they even know the pilots are all Air Tanker civilians… Read more » 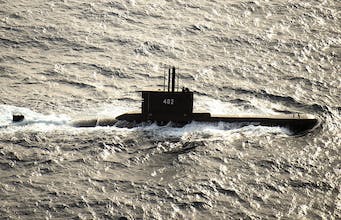 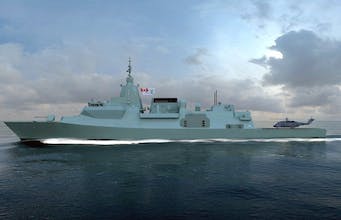 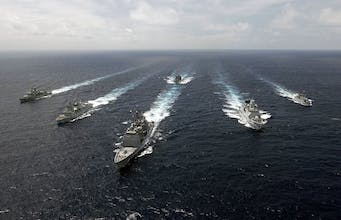