South Korea’s military has begun to consider operating F-35B jets from their Dokdo class assault ships, according to the local Yonhap news agency.

According to the Yonhap News Agency, the South Korean Navy issued a public notice of tender through an electronic defence procurement system of South Korea’s Defense Acquisition Program Administration (DAPA), citing moves by neighbouring countries to consider running F-38Bs aboard their vessels. They reported here:

“The Navy announced a tender for the research service entitled ‘Renewal and Opening Study for Operation of LPH Future Aircraft (F-35B)’ on Defense Agency’s Defense Electronic Procurement System on May 10. The Navy said that the bidding proposal is that the neighboring countries are promoting or carrying out research on loading and operating the F-35B in landing or escort.”

The outlet also quote a military source, who told them:

“I understand that the military top brass have recently discussed whether they can introduce a small number of F-35B fighters and operate them aboard the new ship that has already been deployed and one to be additionally built.”

The existing first of class Dokdo is currently only capable of operating helicopters because her deck is not made of materials that can withstand high temperatures caused by the jump jet.

“Considerations will continue about whether we can run F-35Bs by redesigning the decks of the Dokdo and the new ship that is being constructed,” another source was quoted as saying.

NavyRecognition report here that one major difference is that Marado’s flight deck has been adapted to accomodate the Bell Boeing V-22 Osprey tilt rotor aircraft. Several DAPA images show the Osprey on the flight deck.

For this reason, and the fact that vessel is still at fitting out stage, Marado would probably require less time, work and budget to be converted for F-35B operation.

I would have assumed the SK military was completely focused on deterrence of N Korean attack. Perhaps a silly question but given they share a land border, why do they need amphibious capability?

Amphibious assaults can be used to put the enemy on the back foot in the event of a land invasion as was shown in 1950 when the landings at Inchon put the North Koreans on the defensive and pushed them from the south after they had originally been winning.

Thanks land border is mined for miles in every direction too. Any invasion especially at the begining would require a significant amphibious capability.

Julian1- maybe its not the North Koreans they are thinking about,could just be a way of keeping up with the Joneses (Japanese).

I’m sure some reinforcement of the deck will be required, plus the anti-heat surface as applied to the QE Class?

A little off subject but didnt the albion class have goalkeeper system then switched to phalanx.
Does any one know why ??? I thought goalkeeper was better and a higher calibre.

Was probably because all the vessels using Goalkeeper (invincible class, type 22s etc) were being withdrawn from service and so in the interests of commonality and ease of maintenance/logistics Phalanx was added to Albion class in refit. Plus maybe Phalanx has better radar or the like though that is likely highly classified.

Goalkeeper is a far more substantial system that requires deck penetration, in its early days it boasted better sensor and computing performance but arguably in recent years the latest Phalanx Blocks have overtaken it in that respect.

When it comes to ballistic performance there isn’t actually any real difference between the sub-calibre tungsten dart that both guns fire and Phalanx has a greater engagement range.

With the Invincible class gone it made more sense to standardised Phalanx across the fleet. It is also far more flexible as it is a bolt on solution so the mounts can be rotated around.

Perhaps not actually factors in the decision to switch from Goalkeeper to Phalanx, the ones you already mentioned are compelling, but other factors that occur to me are… 1 – Possibly cost efficiencies due to commonality with USA, Canada & Australia might have been considered more significant that the commonality that Goalkeeper bought with it. 2 – Phalanx (20mm) offers a potential upgrade path to SeaRAM since I believe the 11-shot SeaRAM module is mounted in the same mount and uses the same radar & electro-optics as the 20mm Phalanx setup. Presumably there is different software and probably other tweaks… Read more »

I assume there’s enough space for the same landing technique that we’ll be using just with slightly less margin for error?

Peter Crisp – doubt it,purely guessing but if they fit a Ski Jump they will need to do Vertical Landings,these ships are much smaller the the QE’s.

The Dokdo class are smaller than the Invincible class, so space on-board is going to be very tight. I’m not sure if the rolling vertical landing technique can be adjusted for a much smaller landing area.

The UK backed the right horse with F35B at sea, this aircraft will change naval aviation beyond recognition and I dare say nations like Japan, Singapore, Australia and Spain will all eventually operate F35B from sea. Given the UK strength in STOVL operations this should put us in a strong position with these countries. It should also open up further potential for missile sales like Meteor and SPEAR 3 and ultimately make it easier to build an F35 B reaplcement when the time comes. We should also look to further leverage a crowsnest replacement sharing cost with these countries and… Read more »

Well to those in the”Gutter Press” who continue to denigrate the F35B -guess what-it’s the only show in town for Carriers without Cats and Traps. If South Korea proceeds with its plans then Japan will almost certainly follow suit and possibly Australia also who might switch some of their F35 order to B’s. If the UK had proceeded full tilt to construct a Harrier replacement in the 1990’s with a less ambitious build spec then she would have no doubt cornered the market for VSTOl with customers-Spain,Italy,India,S Korea,Japan,Australia,Thailand etc all looking to replace/create fixed wing capability in their Navies. The… Read more »

I guess I always thought for the UK, cats and traps was about willy-waving, not suitablility for a relative smaller navy in terms of hulls, and not the wide open Pacific but more Med and Gulf – North Atlantic and Arctic, potentially quick built and small runway land bases, a navy that also has a couple of amphib assault ships (when the replacements come along!).

From the looks of these vessells they would struggle to operate F35B, they are a full 10,000 tonnes lighter than Canberra class and even that’s not large for LHD operating F35.

I’m sure the aircraft could physically take off albe it at a lighter load but one wonders how much utility their would be from such a small vessel operating fixed wing assets.

The biggest issue with the Dokdo class is not the flight deck but the lack of hangar space for credible aircraft operations. The hangar space is shared with the vehicle deck, see the diagram here: 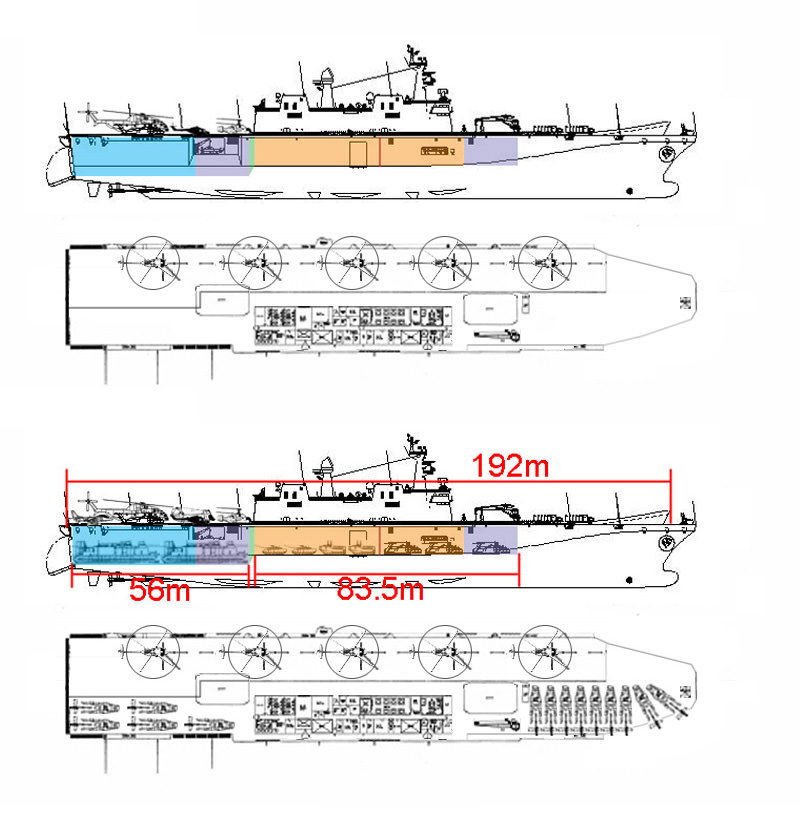 I think the Japanese flat tops could easily handle F35’s and the Aussies already have ski ramps. Agree that for e.g. Thai Navy a bridge too far but the South Korean vessel looks capable enough as would the Italian and Spanish ships. For some of them it would be more about the prestige than a serious increase in capability

Not at all actually. The Dokdo class is not designed with dedicated aviation hangar space or deck like the SPS or the Japanese flat tops. Here’s the internal layout of the Dokdo LPH (blue: well deck, purple: elevators, orange: vehicle / aviation deck) – The only hangar space available is the area aft of the forward aircraft elevator (coloured in orange) which is tiny for a ship of this size. Unless they raise the height of the well deck to the same level of the rest of the hangar, the ship would not be able to hold more than a… Read more »

That’s what I’m talking about for the Scottish Navy, price of the Dokdo was US$ 288 million, 2021 price it with suitable deck, and it’s around £400 million which was my budget (without aircraft of course!).

Hi dadsarmy-hope you are well. Spent a wonderful day at the Durban Light Infantry HQ listening to Pipe Bands from SANDF including the brilliant(good enough for Edinburgh Tatoo) Medical Corps pipers.This Unit saw service in the Anglo-Boer War!
On topic agree with your suggestions but would be so much better if the Navies of Scotland and rUK remained as one!
Cheers Geoff

Ah well, the Navies can exercise together. No live ammo mind!

It would be good to see the SPS Scotia exercising with the HMS QE, F35-Bs doing the hop. But realistically the Scotia would have to be built first, run as an LPH / LHD, before buying and training the F35-Bs. Maybe 4 or 5 for the Scotia, plus same again for training, maintenance etc. It’s a £1billion for them, and there’d be higher priorities to start.

Yes, I just checked Canada and Australia and NZ – the use C, A and NZ! You’re right again 🙂

This is something the RN could look at for replacements for Albion and Bulwark. Standalone air defence and surface targetting, perhaps clearing any naval opposition first. And if the QE was somewhere around, a quick hop over to the QE for a full load of fuel and missiles, then off for the mission. And similar goes for other NATO navies, use the QE as a floating runway and air base.

The replacements for Ocean, Albion and Bulwark need to be a flat top LHD as that has the most flexibility for heli-ops as well as possible F35 use. However they will need to be big to ensure they have both a hangar and well deck, something like the Canberra class would be ideal, as the Wasp class would be too expensive.

Political considerations will never allow a new U.K. LHD to be f35 equipped unless it’s a dire national emergency.We just need two 20-25000 ton LHDs called Hermes and Ocean to give the RM their launch pad and invest in the PASCAT Concept again

Can the Korean Dokdo class Assault ship take F35Bs yes but under conditions. If the ship is in the assault role then it would only carry 4 F35Bs to have its own air cover and to cover the assault troops. If in the mini-carrier, escort carrier role then it would have 8-10 F35Bs. However to achieve this a certain amount of work needs to be carried out on the ship. First a ski jump needs to be added, then the decks need to be strengthened and coated with heat resistant areas and finally a possible widening of the flight deck.… Read more »