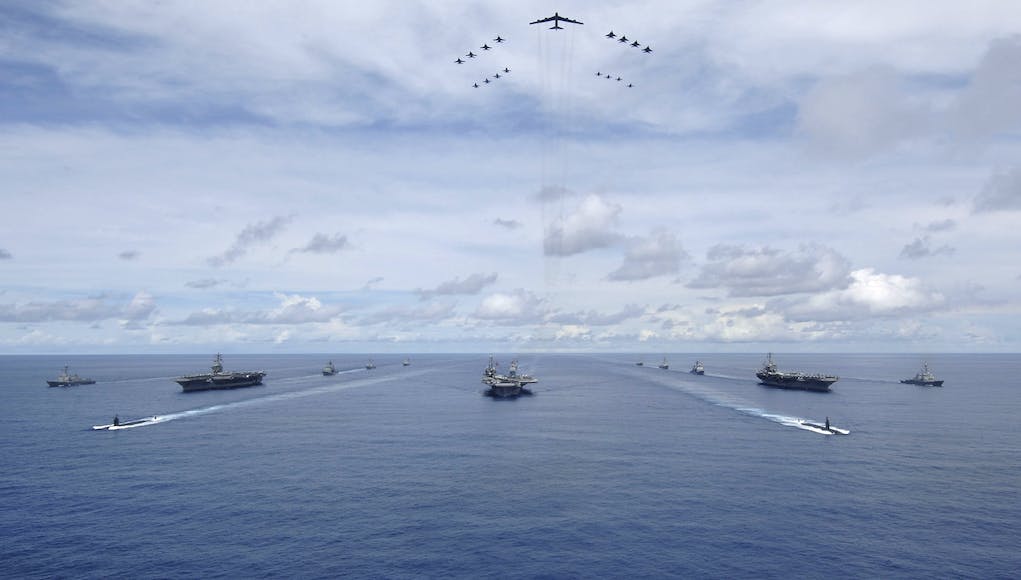 Units assigned to the strike force will conduct coordinated operations in international waters in order to demonstrate the US Navy’s unique capability to operate multiple carrier strike groups as a coordinated strike force effort.

“It is a rare opportunity to train with two aircraft carriers together, and even rarer to be able to train with three,” said US Pacific Fleet Commander, Adm. Scott Swift. “Multiple carrier strike force operations are very complex, and this exercise in the Western Pacific is a strong testament to the US Pacific Fleet’s unique ability and ironclad commitment to the continued security and stability of the region.”

The US Navy say that this is the first time that three carrier strike groups have operated together in the Western Pacific since exercises Valiant Shield 2006 and 2007 off the coast of Guam. Both exercises focused on the ability to rapidly bring together forces from three strike groups in response to any regional situation. Ronald Reagan took part in VS 2006 and Nimitz took part in VS 2007.

These opportunities typically occur when strike groups deployed to the 7th Fleet area of operations from the West Coast of the United States are joined with the forward deployed carrier strike group from Japan.

Getting back on my favourite hobby horse, I’d like to see one of the carrier strike forces being a dual carrier group, with intercarrier operations.

2 or ideally 3 carriers give greater sustainablity. Operations can be conducted round the clock almost indefinitely. With allowance for UNREP and essential maintenance for aircraft and rest for aircrew.

i’d like the u.k to be able to perform that task the americans have 1 major advantage, their carriers have aircraft!

@andrew reeves
They also have a another major advantage, a 704 billion dollar defense budget.

Is that image available in high res?

3 super carriers delivers a very powerful message. No other nation could match that force. Very impressive.

3 carriers delivers a surge in sortie rates between 450-750 a day. That is huge capability.