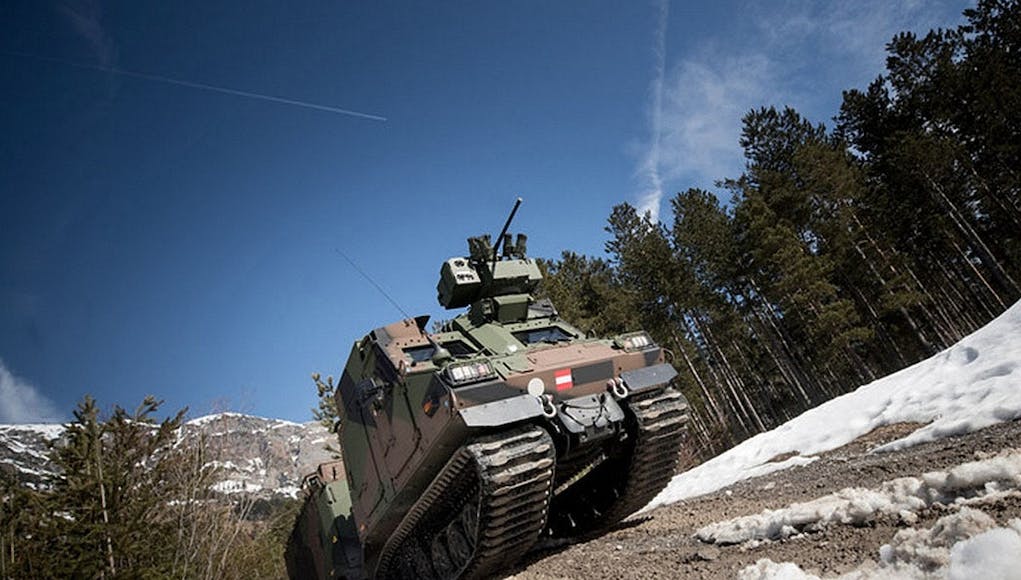 BAE Systems has delivered the first four BvS10 all-terrain vehicles to the Austrian Armed Forces, the company has announced.

BAE Systems is under contract, issued in 2016, to deliver 32 of the Armored Personnel Carrier (APC) variant of the BvS10 to the Austrian Armed Forces.
Two handover ceremonies took place on February 21st and 22nd in the Austrian state of Tyrol and city of Salzburg say the firm and were both attended by Austrian Defence Minister Mario Kunasek. Also attending were representatives of the Swedish government and BAE Systems Hägglunds, the Sweden-based manufacturer of the BvS10.
The first set of vehicles will be fielded by the Austrian Armed Forces’ 24th Infantry Battalion, a battalion of the 6th Mountain Infantry Brigade, which plays a leading role in the European Union Mountain Training Warfare Initiative (EU MTI), and the 2nd Engineer Battalion, which can provide combat support in mountainous terrain.
“The handover of these highly-capable vehicles marks a significant milestone in the BvS10 contract for Austria. We are very pleased with progress to date and the very positive feedback from the Austrian military. We expect final deliveries to conclude later this year,” said Peter Nygren, vice president of business development at BAE Systems Hägglunds.
The Austrian APC variant of the BvS10 is fitted with a number of specific features including a 360 degree Observation Camera System with six Day/Infrared cameras and displays in the front and rear of the cabin for greater situational awareness.
Also featured is the latest Remote Controlled Weapon Station, which can be operated by both the Gunner and the Commander, and is foldable to allow for swift transportation in the field.
0 0 vote
Article Rating

Such a cheap, capable, and flexible vehicle.

I assume there are still older BV206’s around with the RM and the RA, would be nice to get a few more of these to replace them.

A single hull something using the same tracks, transmission, and engine as a weapons carrier would be good……..

It’s great that Australia and the UK are harmonising more equipment such as Boxer and T26. If the UK is serious about global Britain it should really consider much further integration with the CANZUK countries with harmonisation of military procurement and even a common foreign and security policy with coordination of all four countries at the UN Security Council. France is proposing almost the exact same thing with Germany. With the ongoing cluster f**k that is US politics and foreign policy and the lack of any kind of support or common position form the EU the world needs what Winston… Read more »

That for me was the trouble with NATO. NATO in Europe should have been a matter for the Germans, French, et al. We Brits should have joined in a pan-global maritime security grouping based on the White Commonwealth. Perhaps Norway would be the exception but that would have been keeping that flank safe to protect the home islands (as well defend Norway. Love those Skywegians.) The only problem was post-WW2 our defence establishment was land lead…….

In the cold war it had to be but Russia is a failed state with a modest sized economy and population now. Europe can handle it. No need for big British armies sitting in Germany.