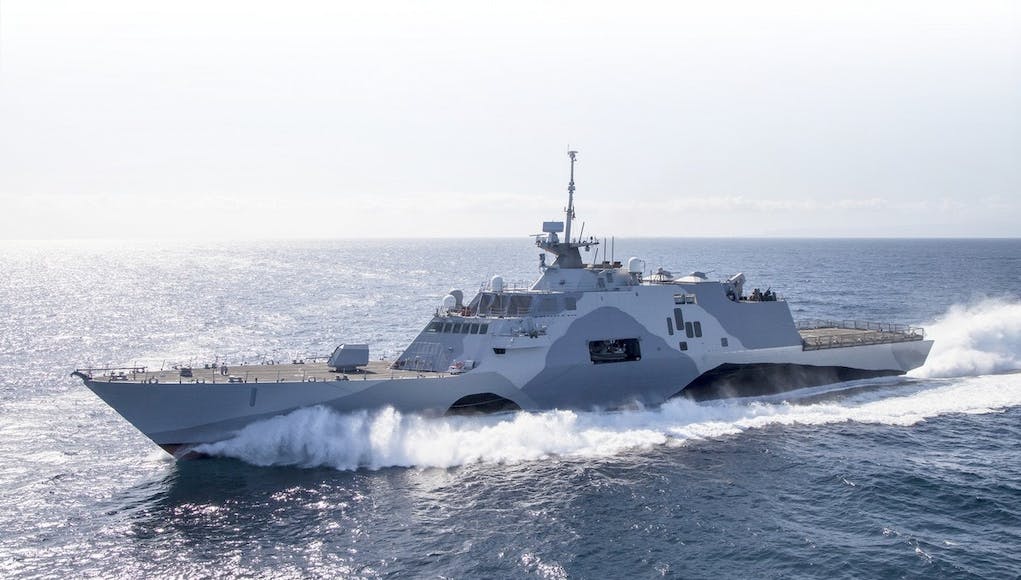 In 2012, Lockheed renamed the Surface Combat Ship (SCS) to match GD’s Multi-Mission Combatant term and revealed that the full capabilities, such as Aegis, would only be available on a stretched 3,500 ton hull. Lockheed Martin offered an Aegis Combat System-equipped variant for national missile defence radar picket use to a number of Persian Gulf states.

The Surface Combat Ship was offered to Saudi Arabia as part of a 2011 arms deal. The total cost for the eight ships was reported to be as much as $5 billion. The Saudi Naval Expansion Program II calls for some $20 billion for new warships, which can include up to 12 Freedom-class ships; the Saudis have not looked to purchase Austal’s Independence-class ship.

The Multi-Mission Surface Combatant variant does away with the LCS modular mission package ability and the forward two mission bays, but keeps the aft mission bay with a stern ramp.

The requirement for an Aegis combat system was dropped for cost reasons and the ships will instead feature the TRS-4D AESA air search radar. Work is expected to be completed by October 2025.

The Multi-Mission Surface Combatant is a lethal and highly maneuverable surface combatant capable of littoral and open ocean operation.

Foreign military sales funding for the Kingdom of Saudi Arabia in the amount of $225,372,361 will be obligated at time of award and will not expire at the end of the current fiscal year.  The Naval Sea Systems Command, Washington, District of Columbia, is the contracting activity.”

Is anybody else surprised at this purchase, seeing as the Freedom-class littoral combat ship has been plagued with problems since day one. Not only that, but with a remit to be based on the east of the country opposite Iran, is the decision to drop Aegis Combat System for the Saudi Ships a huge mistake. Seeing as the Mad Mullahs like their swarms be it Missiles or ships Yes, I admit that problems can be rectified, but you would have presumed that they would have put people off buying the ships, just look at the SA80 to see what I… Read more »

The change from Aegis was to COMBATSS-21. What this means is the ship would be able to defend itself but it would have difficulty without another ship such as a Ticonderoga, Burke, F100, or Hobart etc. in order to fully coordinate missile defense. Because what COMBATS-21 allows is it gives some Aegis components while allowing the customer to mix and match cheaper parts. The logic I believe they were following was that KSA plans to buy both THAAD and Aegis Ashore (which it can link to as COMBATSS-21 supports Aegis Baseline 9) and since they really don’t ever plan to… Read more »

Its been on the cards for at least 3 years. The current RSNF patrol boats (US Supplied) in KANB ( east coast base ) are well over 30 years old and unreliable. The UK supplied Sandown boats have had to take on more of the Maritime Security Patrol work to cover for them, to the detriment of their core MCM role. Its not just the boats that are the prize in this order but its also construction of new port facilities and infrastructure to go with it. The LCS variant is also slotted to be based in a new west… Read more »

Saudi’s aren’t buying ships. They don’t care about the hardware, if they did they would buy something better. This is about buying US backed security long term. They fear the Iranians. They see the US’s energy security solidifying and the region becoming less important.

The Saudi’s don’t really fear the Iranians, what they fear is the internal enemy. Saudi like most of the countries in the region is ruled by a group that are in the minority in their own country and it wouldn’t take much for the people to turn on them. All the Saudi’s are interested in is stable neighbors, so that nothing causes an internal uprising. Sooner or later it will happen (almost did with the Arab spring), and i suspect it will be a huge blood bath if it does, considering the fire power the ruling class has at their… Read more »

I take it you have never lived or worked in KSA or the middle east. I have and still do so I speak with some knowledge when I say you don’t know what you are talking about. KSA is Sunni with a Shia minority. An internal uprising will not happen in KSA any time soon. The internal reforms, the internal security app status and the fact that the young Saudi population love and respect the king/crown prince. Things where a little different in it’s neighbours but even there ( stand fast Yemen and Qatar) things have changed dramatically and a… Read more »

I may not like how KSA operates it legal system and it’s far more conservative and authoritarian than I would ever like, but it’s a very stable government that has give the vast majority of its population exactly what they want, safety security and wealth. It’s not falling to an internal enemy, but it’s got some real existential threats, the tri party tension between Sunni, Shia and Jewish states means that for the forseeable there is always a risk of a general war in the region. Medium term there are risks related to a reduced world dependence on oil. Long… Read more »

Is there any comparison between this version of LCS and the Leander Type 31 from the website opened up today?

Does it have relabiliity issues ? Or is it just bad design from a maintainer point of view ?